KLAYMAN: COLLEGE BASKETBALL WITH THE LIKES OF "ONE & DONE" HAS DESTROYED ANY SENSE OF STUDENT ATHLETICS! COACH K OF MY ALMA MATER DUKE PLAYED A VERY HARMFUL ROLE IN CORRUPTING THE SPORT TO ENHANCE HIS RECORD!
Order "It Takes a Counter-Revolution!" at Amazon.com
Donate and Support Freedom Watch at www.FreedomWatchUSA.org 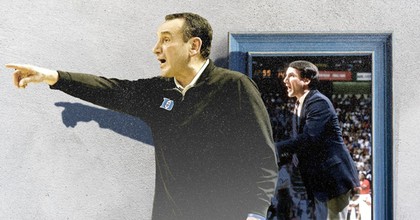 Coach K Is Leaving College Basketball. College Basketball Is Leaving the Era of Coach K's.
By Rodger Sherman
The Ringer
March 24, 2022
Mike Krzyzewski says he doesn't want the story of his retirement to be a distraction for Duke's basketball players. The legendary head coach jumps in to reiterate this every single time those players are asked questions about it—which happened in each press conference after a Duke game at the ACC men's basketball tournament in Brooklyn earlier this month. "It's their season," he said after the Blue Devils' win over Miami in the semifinal. "They only get it once, I've had it numerous times."

If Duke's players are able to successfully avoid thinking about Krzyzewski's departure and the frenzy it has caused, they can do something that virtually everybody else in the college basketball universe cannot. The media will not stop talking about Coach K. Almost every team Duke played against this season put together some sort of pregame tribute for Krzyzewski. (North Carolina, notably, did not—the rivalry is as it should be.)