Klayman: Trump Judge Trevor McFadden Is a Political Hack!
Order "It Takes a Counter-Revolution!" at Amazon.com
Donate and Support Freedom Watch at www.FreedomWatchUSA.org 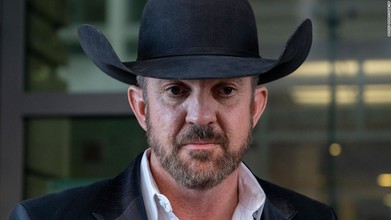 Judge finds January 6 defendant guilty of trespassing on Capitol grounds
By Holmes Lybrand, Hannah Rabinowitz and Katelyn Polantz
CNN
March 22, 2022
(CNN)A federal judge on Tuesday found Couy Griffin, a founder of Cowboys for Trump and the second January 6 defendant to go on trial as part of the Justice Department's massive prosecution, guilty of trespassing on US Capitol grounds while Vice President Mike Pence was there.

Griffin, a conspiracy theorist who also serves as a county commissioner in New Mexico, was acquitted of a second misdemeanor charge of disorderly and disruptive conduct. Griffin argued that he led others in prayer at the Capitol that day.

Judge Trevor McFadden issued the ruling after a sometimes-contentious bench trial that began Monday and ended midday Tuesday. Griffin faces a potential fine, probation or jail time up to one year after being found guilty of entering and remaining in a restricted area.