Capitol Riot Trial Opens for Cowboys for Trump Founder
Order "It Takes a Counter-Revolution!" at Amazon.com
Donate and Support Freedom Watch at www.FreedomWatchUSA.org 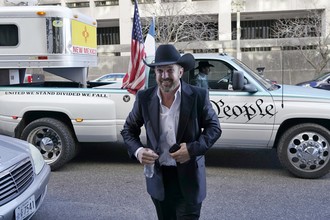 AP NEWS
March 21, 2022
WASHINGTON (AP) — An elected official from New Mexico went to trial Monday with a judge — not a jury — set to decide if he is guilty of charges that he illegally entered the U.S. Capitol grounds on the day a pro-Trump mob disrupted the certification of Joe Biden's presidential election victory.

That's not the only unusual feature of the case against Otero County Commissioner Couy Griffin, whose trial in Washington, D.C., is the second among the hundreds of people charged with federal crimes related to the Jan. 6, 2021, siege.

Griffin is one of the few riot defendants who isn't accused of entering the Capitol or engaging in any violent or destructive behavior. He claims he has been selectively prosecuted for his political views.