Klayman: "One & Done" Coach K's Record Must Be Downsized as It Like Barry Bonds Is Based on Non-Academic "Steroids"!
Order "It Takes a Counter-Revolution!" at Amazon.com
Donate and Support Freedom Watch at www.FreedomWatchUSA.org 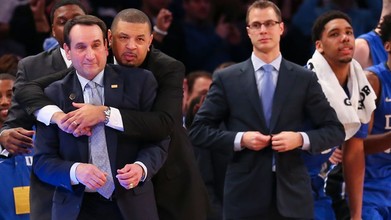 Coach K's legacy beyond Duke includes a coaching tree that is still growing
By Paul Myerberg
USA TODAY
March 20, 2022
GREENVILLE, S.C. — The first to be promoted was Mike Dement, who in 1986 was named the head coach at Cornell. The latest was Nate James, who just completed his first year at Austin Peay. The next to follow is Jon Scheyer, who will assume full control of the Blue Devils' program as soon as Sunday evening or as late as the day after the national championship game in early April.

For decades, Mike Krzyzewski has crafted a coaching tree with branches in nearly every conference, as programs look to capture Duke's style and success through hiring one of his top assistants.

"It's like getting a freaking TED talk or some kind of company seminar or retreat. You get that every day," James said. "It's just an endless amount of knowledge that's consistently poured into you each and every day, each and every season. You try to soak up and drink up as much as you possibly can."