Klayman: This Dishonest Attempt to Deflect Biden's Blame for Ukraine Is Not Credible: Putin Owns Biden and the Latter Is Responsible for the War Due to His Feeble Weakness and Oh Yes His Having Been Bribed by Russia via Son Hunter!
Order "It Takes a Counter-Revolution!" at Amazon.com
Donate and Support Freedom Watch at www.FreedomWatchUSA.org 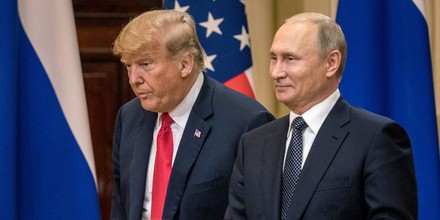 Marie Yovanovitch says Trump's Helsinki press conference with Putin was so 'disastrous' that she couldn't finish eating her french fries
By Sonam Sheth
Business Insider
March 19, 2022
It was a "spectacle" that left people "pondering the depths to which Trump had sunk in his pandering to Putin."

"I watched the infamous Trump-Putin press conference at my Odesa hotel that evening while pecking at room-service french fries," the book says. "I quickly lost my appetite as I saw our president toady up to Putin and take the Russian's word over that of our own intelligence agencies, which assessed that Russia had interfered in the 2016 US presidential election."

Trump's presser with Putin shocked US allies and provoked severe backlash from national security and foreign policy experts, and even some of Trump's own supporters. Among other things, he said he didn't "see any reason" why Russia would have meddled in the 2016 election.