Klayman: No Charges for Attacking Police If You Are Black: "Black Privilege!"
Order "It Takes a Counter-Revolution!" at Amazon.com
Donate and Support Freedom Watch at www.FreedomWatchUSA.org 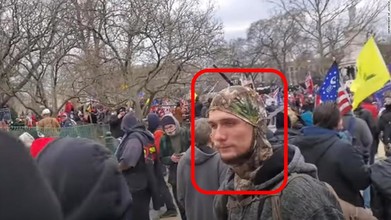 Justice Department charges Wisconsin man who said it was 'satisfying' to attack police on January 6
By Tara Subramaniam and Hannah Rabinowitz
CNN
March 18, 2022
(CNN)The Justice Department unsealed charges on Thursday against a 23-year-old Wisconsin man who allegedly told associates it was "satisfying" to assault US Capitol Police officers on January 6, 2021, and threatened to return to Washington, DC, with paintball guns that resembled an automatic rifle.

Riley Kasper was arrested on Thursday and is facing six federal charges, including assaulting law enforcement using a deadly or dangerous weapon. He is scheduled to make his first appearance in federal court Thursday.

According to videos highlighted in court documents, Kasper pepper-sprayed police officers who were standing between him and the Capitol building. In a Facebook message, Kasper said he was part of the first group to knock down the gate and force police to retreat.