Klayman: Too Bad for Lucas Denney He Is Not Black: Otherwise There Would Have Been No Criminal Charges for Hitting a Police Officer With a Pole!
Order "It Takes a Counter-Revolution!" at Amazon.com
Donate and Support Freedom Watch at www.FreedomWatchUSA.org 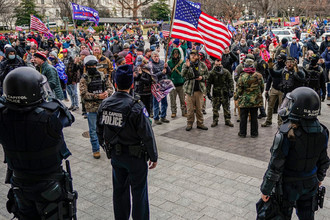 Judge takes unusual guilty plea from Capitol riot suspect
By Josh Gerstein
POLITICO
March 17, 2022
A Texas man accused of assaulting a police officer with a pole during the Capitol riot pleaded guilty to that crime on Thursday even though prosecutors indicated earlier this week that they were willing to agree to have that charge dismissed, for now, due to mishandling of the case.

The unusual move by Lucas Denney, 44, came after an even more unusual admission by prosecutors that they violated federal law by failing to promptly arrange a court appearance for Denney last month after he was transferred to a jail near Washington from a federal court near his home in Mansfield, Texas.

Earlier this month, a federal magistrate judge in Washington repeatedly apologized to Denney after saying he had effectively become "lost" in the judicial system. U.S. Magistrate Judge Zia Faruqui also chastised prosecutors for bringing Jan. 6 cases at a faster pace than they appeared prepared to handle.