Zelensky Invokes Judaism to Rally Support for Ukrainian Cause
Order "It Takes a Counter-Revolution!" at Amazon.com
Donate and Support Freedom Watch at www.FreedomWatchUSA.org 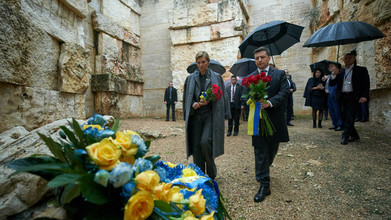 France 24
March 17, 2022
With online posts in Hebrew and appeals to Jews to "cry out" in response to Russia's invasion, Ukrainian President Volodymyr Zelensky has invoked his faith to rally support for his embattled country.

The 44-year-old comedian-turned-president told the Times of Israel in 2020 that he had an "ordinary... Jewish upbringing," explaining "most Jewish families in the Soviet Union were not religious."

He has also described religion as a personal matter and even swore his presidential oath on the Bible.