Klayman: Biden and Putin Have Much in Common: Both Pathological Liars!
Order "It Takes a Counter-Revolution!" at Amazon.com
Donate and Support Freedom Watch at www.FreedomWatchUSA.org 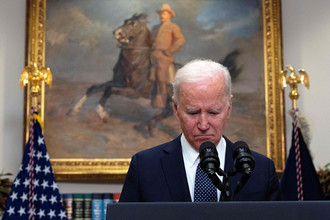 Inflation is now getting too close to disco-era highs for comfort, with Biden as president after 36 years in the Senate and eight years as vice president. Inflation skyrocketed 7.9 percent over the past year, according to the February report from the Bureau of Labor Statistics, the fastest rate of inflation since January 1982.

That puts Biden and Democrats in dangerous political territory heading into November's midterm elections. But Biden — whose poll numbers have already been boosted following Russia's invasion of Ukraine — thinks he has a boogeyman to pin the problem on: Vladimir Putin. The Biden administration blamed the Russian president Thursday for the rapid American price hikes, as it did earlier in the week when it came to spiking gas prices. Related