Klayman: The Biggest Threat to World Peace and Freedom Is Biden's Cowardice and Feeble Weakness!
Order "It Takes a Counter-Revolution!" at Amazon.com
Donate and Support Freedom Watch at www.FreedomWatchUSA.org 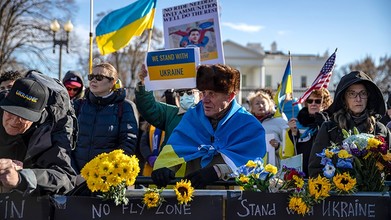 Biden finds hands tied on Ukraine
By Morgan Chalfant and Alex Gangitano
TheHill
March 15, 2022
The Biden administration has found its hands tied as it seeks to respond to Russia's invasion of Ukraine without becoming embroiled in the conflict.

President Biden wants to provide support to the Ukrainian people to help them fight the Russian military, but he has staunchly avoided taking any steps that would pull the U.S. or its NATO allies directly into the conflict, which officials warn would trigger a larger war that could devastate Europe.

It's the reason the Pentagon rejected a Polish plan to deliver fighter jets to Ukraine, and the president has refused to put U.S. boots on the ground there.