Klayman: Time for Gavin Newsom to Finally Admit He Is Gay or Bi-Sexual!
Order "It Takes a Counter-Revolution!" at Amazon.com
Donate and Support Freedom Watch at www.FreedomWatchUSA.org 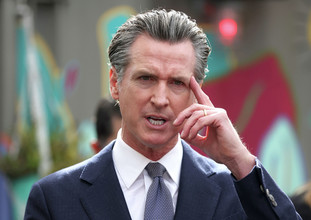 Newsom calls on Disney to take further action against Florida
By Eric Ting, SFGATE
SFGATE
March 15, 2022
Newsom is calling on Disney to undo plans to relocate approximately 2,000 employees from California to Florida over a recent bill passed by the latter state's Legislature.

The bill, dubbed the "Don't Say Gay" bill by critics, bans lessons on sexual orientation and gender identity in kindergarten through third grade. Supporters of the bill bristle at the "Don't Say Gay" characterization, noting that the curriculum ban applies only to younger age groups and arguing the bill does not bar discussion of LGBT issues should they come up in a manner not tied to official curriculum. However, critics point out that the bill also empowers parents to bring lawsuits over content that is considered not "age-appropriate or developmentally appropriate for students" at any grade level, which is vague enough language that the bill could have a general chilling effect on discussion of LGBT issues.

"We know that LGBTQ youth already face higher risk for bullying, depression, and suicide — and this bill will only add to the stigma that fuels these disparities," Trevor Project CEO and executive director Amit Paley said of the legislation.