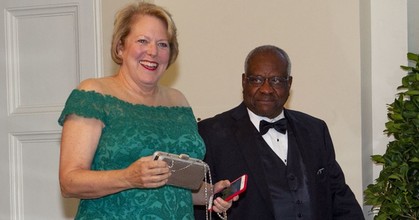 Ginni Thomas, wife of Supreme Court justice, says she attended Jan. 6 'Stop the Steal' rally before Capitol attack
By Mariana Alfaro
Washington Post
March 14, 2022
Virginia Thomas, wife of Supreme Court Justice Clarence Thomas, for the first time has publicly acknowledged that she participated in the Jan. 6, 2021, "Stop the Steal" rally on the Ellipse that preceded the storming of the Capitol by a pro-Trump mob, raising questions about the impartiality of her husband's work.

In an interview with the conservative Washington Free Beacon that was published Monday, Thomas, who goes by Ginni, said she was part of the crowd that gathered on the Ellipse that morning to support President Donald Trump. Trump was claiming falsely that widespread voter fraud had delivered the presidency to Democrat Joe Biden — a falsehood he continues to repeat.

Thomas said she was at the rally for a short time, got cold and went home before Trump took the stage at noon that day.