Prosecutors Admit They Violated a Capitol Rioter's Rights After Leaving Him Waiting in Jail Since December
Order "It Takes a Counter-Revolution!" at Amazon.com
Donate and Support Freedom Watch at www.FreedomWatchUSA.org 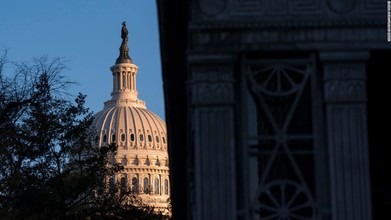 By Hannah Rabinowitz and Holmes Lybrand
CNN
March 14, 2022
(CNN)The Justice Department asked a judge on Monday to drop a criminal case against a Capitol rioter, admitting that prosecutors failed to schedule a hearing within the legal timeframe and asking for permission to charge the Texas man again for allegedly attacking police.

In a court filing, prosecutors said that because of "unintentional" errors, they violated Lucas Denney's speedy trial rights, leaving Denney waiting in jail since his arrest in December.

The filing is a dramatic example of the kinds of complaints rioters and defense lawyers have been making for months about stalled trials, issues reviewing the massive compilation of evidence from prosecutors, and long pretrial stints in jail.