Klayman: Apparently Mad He Could Not Sell Pardons Trump "Friend" Roger Stone Turns on the President: With "Friends" Like These Who Needs Enemies!
Order "It Takes a Counter-Revolution!" at Amazon.com
Donate and Support Freedom Watch at www.FreedomWatchUSA.org 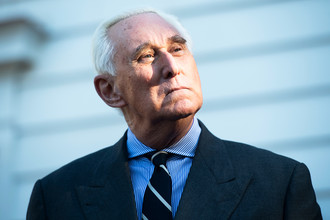 Roger Stone Called Trump 'Greatest Single Mistake' in U.S. History After Not Issuing Jan. 6 Pardons: Report
By William Vaillancourt
Rolling Stone
March 13, 2022
In the waning days of the Trump administration, Roger Stone railed against the outgoing president for refusing to issue preemptive pardons relating to the Jan. 6 insurrection, The Washington Post reported on Friday. Stone called the man he helped win the presidency in 2016 the "greatest single mistake in American history," according to video footage obtained by the paper.

The footage, shot by a Danish film crew for an upcoming documentary about Stone called "A Storm Foretold," also offered details about the extent to which the longtime Trump adviser may have been involved in efforts to overturn the 2020 presidential election. For instance, footage shows Joshua James, a member of the far-right Oath Keepers group who pleaded guilty to seditious conspiracy on Wednesday, in Stone's room at the Willard Hotel hours before the insurrection. Stone also communicated with Oath Keepers founder Stewart Rhodes — who is awaiting trial on seditious conspiracy charges — later in January, the footage reveals. (After being subpoenaed in November by the Jan. 6 committee, Stone declined to answer questions during testimony and last month sued to avoid turning over his phone records.)