Klayman: Told You So: Coach K's Bastardized One & Done Breeds Non-Student Losers!
Order "It Takes a Counter-Revolution!" at Amazon.com
Donate and Support Freedom Watch at www.FreedomWatchUSA.org 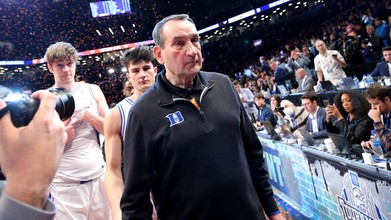 Virginia Tech shocks Duke to complete stunning run to ACC tournament championship
The Fayetteville Observer
March 13, 2022
NEW YORK — For the second time in seven days, Duke's Mike Krzyzewski was denied a seminal moment in the twilight of his coaching career.

After rival North Carolina spoiled his final game at Cameron Indoor Stadium last Saturday, it was upstart Virginia Tech that knocked off the Blue Devils in Coach K's final appearance in the ACC Tournament in the final Saturday at Brooklyn's Barclays Center.

Playing their fourth game in four days, the seventh-seeded Hokies (23-12) clinched a berth in next week's NCAA Tournament with a stunning 82-67 win over top-seeded Duke behind a blistering offensive performance from Hunter Cattoor.