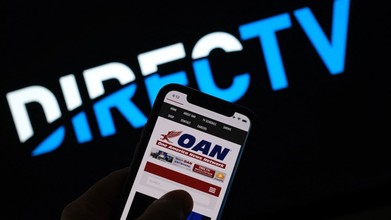 By Justin Rohrlich
The Daily Beast
March 12, 2022
Ultra-conservative news network One America News has filed a lawsuit against DirecTV, AT&T, and AT&T Chairman William Kennard for dropping the conspiracy-minded channel from its cable lineup. OAN's programming was "designed to have broad appeal with special interest to viewers interested in independent and conservative political thought," the suit claims. But AT&T, which bought DirecTV in 2015 and spun it off as an independent business last year, deep-sixed its agreement to carry OAN—which was sued for $1.6 billion by voting machine manufacturer Dominion for defamation over false claims about the 2020 election—in the face of "political pressure," the filing alleges, claiming the move was "part and parcel of a larger, coordinated, extremely well-financed political scheme to take down [OAN CEO Robert] Herring and unlawfully destroy its ability to operate in the media business." The lawsuit comes a day after Texas Attorney General Ken Paxton sent a letter to DirecTV asking the company to reconsider, citing, rather disingenuously, "an alarming rate of conservative voices being squashed throughout the country. OAN is simply representing a different perspective from the media's liberal ideology."