Klayman: Coach K Has Selfishly Destroyed Academic Integrity: The Irony Is Duke B-Ball Has Not and Will Not Win Championships With Players Who Have Little to No Allegiance to the University!
Order "It Takes a Counter-Revolution!" at Amazon.com
Donate and Support Freedom Watch at www.FreedomWatchUSA.org 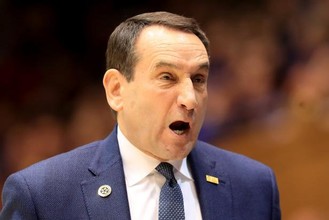 Are we witnessing the end of the Coach K era?
By Shane Ryan
The Loop
March 9, 2022
At some point, the Duke University men's basketball team turned into a one-and-done factory, and the funny thing about is that Mike Krzyzewski—by any measure one of the two or three greatest coaches in men's college basketball history, and by wins the absolute best—fell neatly into John Calipari's slipstream and never really took any heat for it. While Calipari was the sport's arch-villain to the purists, transforming college basketball into something transactional and grotesque (as though the prevailing system of indentured servitude wasn't already grotesque), Coach K mostly escaped criticism by doing the same exact thing, but later. He too decided that there was no better way forward than to assemble as many great freshmen as you could get, year after year, and try your best to foster some chemistry in a short time span before they left. It yielded a national championship exactly once, just like it did for Calipari, when those freshmen were a little more special than most years, and it came up short the rest of the time when the task of creating a juggernaut in a handful of months was too much. Even with talent like Zion Williamson and R.J. Barrett on the court, at the same time, Duke failed to reach the Final Four.