Klayman: One Word for the Stupid Braindead Feeble and Weak Imposter of a President Joe Biden: Despicable!
Order "It Takes a Counter-Revolution!" at Amazon.com
Donate and Support Freedom Watch at www.FreedomWatchUSA.org 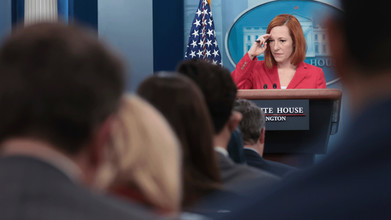 White House is pressed on potential oil deals with Saudi Arabia, Venezuela and Iran
By Myah Ward
POLITICO
March 8, 2022
The White House on Monday pushed back on concerns about the Biden administration's willingness to cut deals with countries like Saudi Arabia, Iran and Venezuela as it looks for ways to blunt skyrocketing fuel prices in the United States.

White House press secretary Jen Psaki faced multiple questions during Monday's briefing on how the administration views these trade-offs of bartering with countries "that may have engaged in unsavory actions in the past," as reports trickled out in recent days that President Joe Biden and European counterparts are discussing a ban on Russian oil imports to further punish President Vladimir Putin for his country's attack on Ukraine.

The Biden administration is in a tricky position as it faces bipartisan calls to ban Russian oil, a move that would upend markets in a global economy still recovering from the pandemic. As the White House weighs its next move, inflation tops the minds of Americans feeling the squeeze of rising prices, especially at the gas pump.