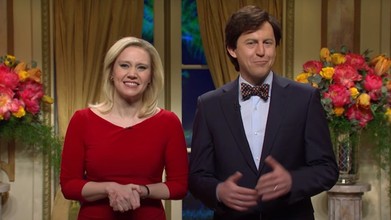 The show opened with the "Fox News Ukrainian Invasion Celebration Spectacular," which was hosted from Mar-a-Lago. Carlson, played by Alex Moffat, and Ingraham, played by Kate McKinnon, hosted the fictitious event.

"Good evening, everyone. I'm Tucker Carlson. I'm like if a pair of boat shoes came to life," Moffat's Carlson said.