Klayman: Biden's Refusal to Fully Arm Ukraine Leaves Blood on His Braindead and Incompetent Hands! So Much for Sanctions!
Order "It Takes a Counter-Revolution!" at Amazon.com
Donate and Support Freedom Watch at www.FreedomWatchUSA.org 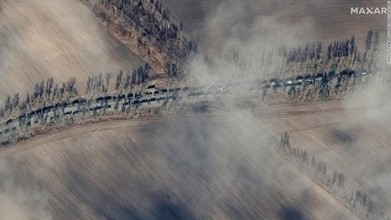 Russia bombs residential area of Kharkiv and intensifies Kyiv assault as talks with Ukraine end
By Helen Regan, Tim Lister, Paul P. Murphy, Tara John, Gianluca Mezzofiore and Katie Polglase
CNN
March 1, 2022
Kyiv, Ukraine (CNN)Russian forces bombarded a residential area in Ukraine's second-largest city with rockets on Monday, killing at least nine people, and several large detonations were heard in the center of the capital Kyiv, as talks between delegates on both sides in Belarus came to a close.

The attack and explosions were launched as Russia becomes increasingly isolated from the rest of the world, particularly Western nations, which have been imposing a rash of sanctions on the country since it launched its invasion of Ukraine last week.