Klayman: All Repeat All American Presidents Have Acted Disgracefully but Biden Is the Absolute Worst in Not Sending War Materials at the Height of the Russian Threat and Later Invasion: Put Bluntly Biden Is a Braindead Cowardly "Piece of Shit!"
Order "It Takes a Counter-Revolution!" at Amazon.com
Donate and Support Freedom Watch at www.FreedomWatchUSA.org 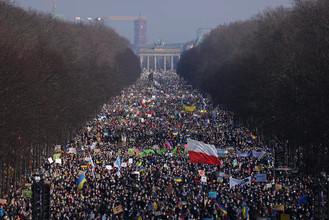 As over 100,000 rally for Ukraine, Germany announces vast defense spending increase that may upend European security policy
By Rick Noack, Emily Rauhala and Griff Witte
Washington Post
February 28, 2022
European leaders have for years sought to forge from their fractious ranks a robust response to a rising Russian threat — without much success. But just days after Russia's invasion of Ukraine, the Kremlin suddenly faces a continent that has rarely appeared so united.

As Europe's biggest economy, which had long been the key obstacle to more decisive action against Russia, Germany dramatically changed course this weekend as Chancellor Olaf Scholz announced a vast increase in the country's defense spending and greenlighted arms deliveries to Ukraine. Not long after, the European Union announced it will finance and deliver weapons, even fighter jets, to Ukraine — a "watershed" move for the bloc.

In Germany, where 100,000 people turned out Sunday in Berlin to protest the invasion, the moves marked a seismic shift for a country that has been allergic to involvement in international conflict since the end of World War II.