Klayman: The Meaning Of "Voter Suppression" to Biden, Dems and the Left Is Defined by Them as Preventing Voter Fraud by Blacks and Other Minorities!
Order "It Takes a Revolution: Forget the Scandal Industry!" at Amazon.com
Donate and Support Freedom Watch at www.FreedomWatchUSA.org 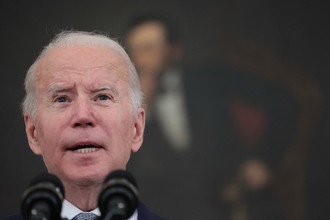 'We are going right to the belly of the beast': Biden takes on Georgia
By Laura Barrón-López, Christopher Cadelago
POLITICO
January 9, 2022
Fresh off a high-profile speech in which he warned that a dagger had been placed at the throat of American democracy, President Joe Biden will travel to the state that White House officials view as "ground zero" for Republican-led election suppression efforts.

Biden will speak in Georgia on Tuesday. In his remarks, he is expected to not only echo the themes of his address on the anniversary of the Jan. 6 insurrection but to expand on his endorsement of a filibuster carveout to pass voting rights legislation in the Senate.

The speeches and related meetings from Biden and Vice President Kamala Harris are part of the administration's offensive to beat back GOP efforts to both restrict voting access and seed skepticism of America's electoral system.