Klayman: Big Mistake for Trump to Stay in The "Closet" With Lindsey Graham on Jan. 6!
Order "It Takes a Revolution: Forget the Scandal Industry!" at Amazon.com
Donate and Support Freedom Watch at www.FreedomWatchUSA.org 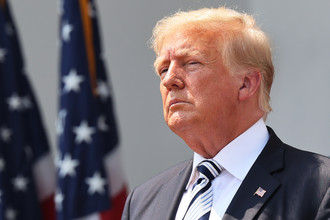 Trump spent Jan. 6 anniversary watching cable news and fuming
Newsweek
January 8, 2022
As President Joe Biden spoke on January 6, the first anniversary of the Capitol riots, Donald Trump was fuming. From his Mar-a-Lago estate, he watched as Biden lambasted him, blaming him directly for the unrest, branding him as nothing less than a threat to American democracy.

Trump had known what was coming, people close to the president told Newsweek. He expected Biden and the media to savage him on the anniversary. Not because he deserved it—close friends and political allies of the former president all say he still angrily rejects any culpability for the January 6 riot—but because, as he told one friend, "it's all they've got."