Klayman: The New York Times Has Fomented Radical Black and Radical Jewish Left Domestic Terrorism! In Effect It's a Co-Conspirator!
Order "It Takes a Revolution: Forget the Scandal Industry!" at Amazon.com
Donate and Support Freedom Watch at www.FreedomWatchUSA.org 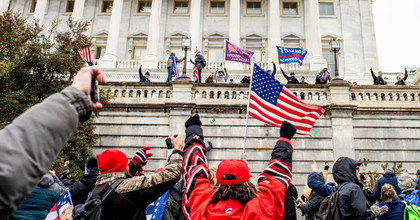 Was the Jan. 6 Attack on the Capitol an Act of 'Terrorism'?
By Charlie Savage
New York Times
January 8, 2022
WASHINGTON — After a mob of Trump supporters stormed the Capitol last year, many Democrats and Republicans alike denounced the riot using terms like "terrorism." But many Republicans later backed away from such condemnations as they sought to realign themselves with former President Donald J. Trump.

The highest-profile example yet came on Thursday, when the Fox News host Tucker Carlson accused Senator Ted Cruz of purposefully lying because he had continued to call the events of Jan. 6 a terrorist attack, including at a Senate hearing this week.