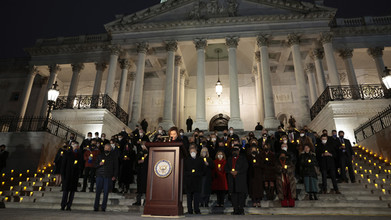 The immovable Republican Party and 'ink-blot politics'
NPR.org
January 7, 2022
Supporters of former President Donald Trump stormed the U.S. Capitol on Jan. 6, 2021. It was an effort to stop the procedural certification of a presidential election that Joe Biden won and Trump lost. The mob was egged on by conspiracies and Trump's lies about that 2020 election.

Those are facts. One year later, and a day after the commemoration on Capitol Hill of that attack, those facts should be indisputable.

And yet millions on the right do dispute them. They've been convinced by Trump, reinforced by right-wing media and enabled by Republican elected officials that his meritless lies about a stolen election are somehow true.