Klayman: What Is the Problem?: Coach K Is Not God and He Has Ruined My Alma Mater's Academic Integrity With One & Done Player "Ringers" Who Have No Business Being at Duke!
Order "It Takes a Revolution: Forget the Scandal Industry!" at Amazon.com
Donate and Support Freedom Watch at www.FreedomWatchUSA.org 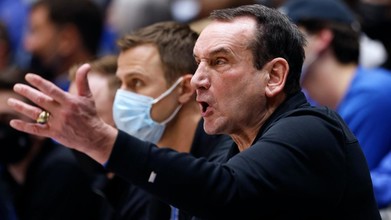 Devoe appeared to point at Krzyzewski after making a layup with 5:51 remaining that cut the Yellow Jackets' deficit to 55-47. Devoe's gesture came as Krzyzewski was signaling for a timeout, and it clearly did not sit well with the Hall of Fame coach. Krzyzewski had a long discussion with an official after the exchange, and despite the fact that the teams did not go through a traditional postgame handshake line, Krzyzewski spoke to Devoe after the game. He then had a long talk with Georgia Tech coach Josh Pastner.