Klayman: Politico's Reporter Josh Gerstein Is a Member of the Jewish Left Which Is So Destructive Not Just to Our Nation but Also to Israel and Fellow Jews!
Order "It Takes a Revolution: Forget the Scandal Industry!" at Amazon.com
Donate and Support Freedom Watch at www.FreedomWatchUSA.org 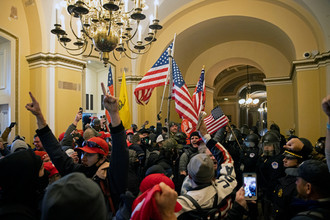 Why DOJ is avoiding domestic terrorism sentences for Jan. 6 defendants
By Josh Gerstein
POLITICO
January 4, 2022
The storming of the Capitol on Jan. 6 has been denounced by the White House, the FBI and the Justice Department as an act of domestic terrorism, but one year after the insurrection, prosecutors have yet to ask judges to impose the harsher sentences federal law recommends for defendants motivated by politics.

Instead, even as some judges have publicly debated whether the charges against Jan. 6 defendants qualify as "crimes of terrorism," prosecutors have repeatedly pulled back on tougher sentences, citing unspecified "facts and circumstances."

The so-called sentencing enhancement for terrorism crimes was created as a result of legislation Congress passed following the 1993 bombing in a parking garage at the World Trade Center. The provision initially applied only to crimes linked to international terrorism, but after the bombing of the Oklahoma City federal building in 1995, Congress moved to expand the enhancement to cover terrorism inspired purely by domestic causes.