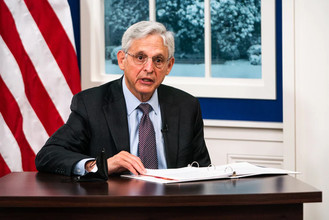 By Matt Zapotosky
Washington Post
January 4, 2022
Attorney General Merrick Garland will give a speech Wednesday about the Justice Department's efforts to investigate and prosecute those responsible for the Jan. 6 riot at the Capitol, stressing the department's "unwavering commitment to defend Americans and American democracy from violence and threats of violence," a Justice Department official said.

In the address, scheduled for the day before the anniversary of the attack, Garland will not speak about specific people or charges, said the official, who spoke on the condition of anonymity because the speech had not yet been officially announced.

Rather, Garland, the nation's top law enforcement officer, will offer broad remarks about "the department's solemn duty to uphold the Constitution, follow the facts and the law and pursue equal justice under law without fear or favor."