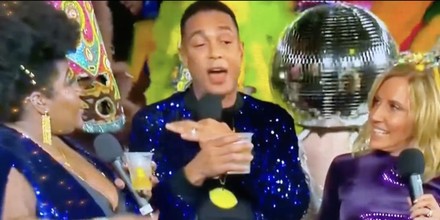 Dressed in a blue sequined jacket and wearing a necklace adorned with a lemon symbol (Cause, you know, Lemon is his last name?), he stood on a stage in New Orleans — with a cup of some liquid in hand — with fellow CNN talking head Alisyn Camerota and comedian Dulcé Sloan.

And Lemon went off on his haters.