Klayman: DC & Other Hack Federal Judges Are the Primary Cause of the Uprising on Jan. 6, 2021! Thomas Jefferson Predicted It!
Order "It Takes a Revolution: Forget the Scandal Industry!" at Amazon.com
Donate and Support Freedom Watch at www.FreedomWatchUSA.org 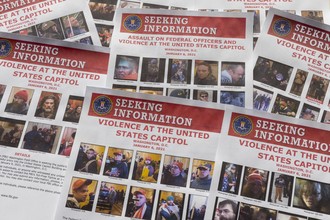 Capitol rioters' tears, remorse don't spare them from jail | AP News
AP NEWS
January 2, 2022
WASHINGTON (AP) — Florida business owner Robert Palmer cheered on the violence at the U.S. Capitol on Jan. 6 before he joined the fray. Screaming obscenities, he hurled a wooden plank and a fire extinguisher at police officers trying to ward off the mob.

Nearly a year later, Palmer fought back tears when he faced the federal judge who sentenced him to more than five years in prison. He said he was "horrified, absolutely devastated" by what he had done.

"I'm just so ashamed that I was a part of that," Palmer told U.S. District Judge Tanya Chutkan on Dec. 17 before she gave him the longest prison term for any rioter so far.