Klayman: How Can the Pope Be Catholic If He Condones Giving the Communion to Baby Killer and Phony Catholic Joe Biden!? Instead Francis Is Furthering and Complicit in the Continuing Murder of Hundreds of Millions of Unborn Children!
Order "It Takes a Revolution: Forget the Scandal Industry!" at Amazon.com
Donate and Support Freedom Watch at www.FreedomWatchUSA.org 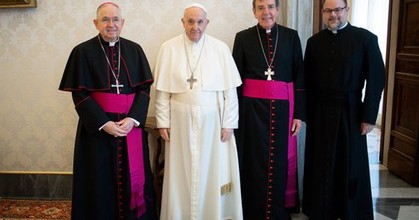 In 2021, it became obvious the US bishops and the pope are singing from different hymnals
National Catholic Reporter
December 29, 2021
The life of the Catholic Church in this country in 2021 was characterized by an obvious, flailing culture war fit and evidence the pope is more and more determined to press forward with the reception of Vatican II in ways that will likely affect the U.S. church in profound ways.

The effort by the leadership of the United States Conference of Catholic Bishops to pick a fight with the nation's second Catholic president was the dominant story of the year. NCR's editors named Archbishop José Gomez its Catholic Newsmaker of the Year because of his role in the bishops' conference's catastrophically narrow focus on President Joe Biden's support for legal abortion, and consequent failure to recognize the unique opportunity presented by having a president who attends Mass with a frequency fewer and fewer Catholics display, and who has articulated the importance Catholic social teaching has had on his political views.