Klayman: Wrong Kamala: Media Coverage of Your "Act" Would Be Even Worse If You Were Not a "Black" Female! You Are an Affirmative Action VP!
Order "It Takes a Revolution: Forget the Scandal Industry!" at Amazon.com
Donate and Support Freedom Watch at www.FreedomWatchUSA.org 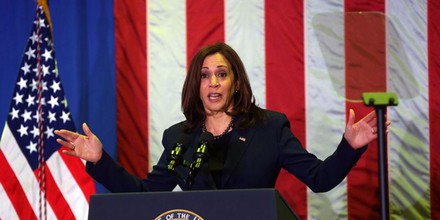 Report: Kamala Harris complains to allies that media coverage of her would be better if she were white and male
TheBlaze
December 24, 2021
According to a report from the New York Times, Vice President Kamala Harris is unhappy with many things — including the way she is treated by other members of the Biden administration, and how she is portrayed by the press. And with regard to the press, she thinks she knows what is to blame: the fact that she isn't white and male.

According to the report, Harris is frustrated about her historically-low approval ratings, and many of her allies feel that "while Mr. Biden relied on her to help him win the White House, he does not need her to govern." Some unnamed supporters and staffers went further, claiming that the administration is actively undercutting her by not giving her a substantive policy role.