Klayman: Sen. Blumenthal Is a Dishonest Member of the Marxian Jewish Left So His Apology Is Another Lie!
Order "It Takes a Revolution: Forget the Scandal Industry!" at Amazon.com
Donate and Support Freedom Watch at www.FreedomWatchUSA.org 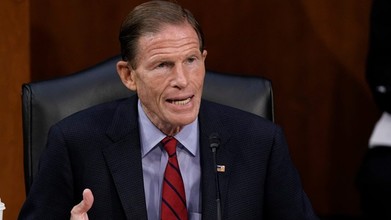 The senator spoke at the Amsted Award ceremony on Dec. 11, where he honored the recipients with an honorary certificate. Speakers at the event regularly encouraged attendees to register with the Communist Party.

"My understanding was that this ceremony was strictly a labor event,'' Blumenthal said Friday in a telephone interview with the Hartford Courant. "If I had known the details, I wouldn't have gone. ... Let me just say very emphatically, I'm a Democrat and a strong believer in American capitalism. I have been consistently a Democrat and a strong supporter and believer in American capitalism.''