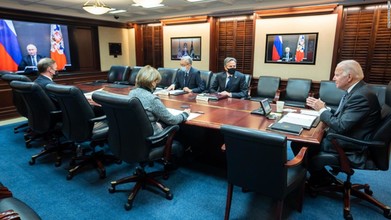 'A four-week window': Biden aims to learn from Obama's mistakes with quick moves to deter Putin from invading Ukraine
By Natasha Bertrand
CNN
December 19, 2021
(CNN)When the US intelligence community first picked up signs in the fall that Russia could be preparing a new attack on Ukraine, President Joe Biden directed his administration to act -- and fast.

Wary of repeating mistakes made in 2014, when the US and Europe were caught off guard by Russia's annexation of Crimea, Biden directed his national security team to use every tool possible to try to deter Russian President Vladimir Putin while a possible invasion was still assessed to be several months away, a senior US official told CNN.

"What we have been doing is very calculated," the official said. "But we only have about a four-week window from now" to pull it off, he added.