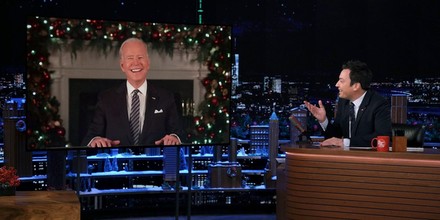 Biden tells Jimmy Fallon right wing extremism in the GOP and Trump's big election lie are a wedge in the way of bipartisanship
By Sarah Al-Arshani
Business Insider
December 11, 2021
President Joe Biden took a shot at partisanship and Republicans during an interview with "The Tonight Show" host Jimmy Fallon on Friday night.

Biden told Fallon that part of the reason why he was late to taping for the show was because he was at the funeral of former Senator Bob Dole.

"He asked me on his deathbed whether I would do his eulogy," Biden said. "We're friends. We disagree, but we're friends. We used to have an awful lot of that relationship and it still exists except that the QAnon and the extreme elements of the Republican Party and what Donald Trump seem to be feeding with the 'Big Lie.'"