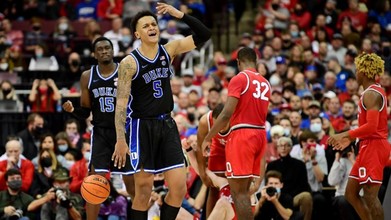 Duke vs. Ohio State score, takeaways: No. 1 Blue Devils fall to Buckeyes in first game after taking top spot
By David Cobb
CBSSports.com
December 1, 2021
Duke's stay at No. 1 in the AP Top 25 may not last longer than one week after the Blue Devils suffered a 71-66 loss at Ohio State on Tuesday night the day after rising to the top of the rankings. Ohio State star forward E.J. Liddell hit a contested jumper with 15 seconds remaining to put the Buckeyes ahead 69-66, and Duke freshman phenom Paolo Banchero missed a game-tying 3-pointer with three seconds left.

Ohio State closed the game on a 14-1 run, outscoring Duke 41-23 in the second half after trailing 49-34 with 18:21 to play. The Blue Devils (7-1) were held scoreless for the final 4 1/2 minutes of the game and the comeback victory prompted a court-storming at OSU's Value City Arena in celebration of a result that changes the trajectory of the Buckeyes' season. Ohio State (5-2) lost a six-point game at Xavier on Nov. 18 and dropped a 71-68 game against Florida on Nov. 24 on a buzzer-beater.