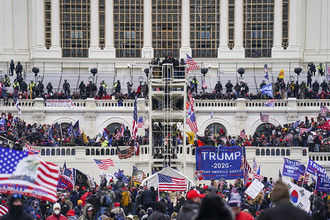 Judge lets actor charged in Jan. 6 riot head home despite 'gobbledygook' at hearing
By Josh Gerstein
POLITICO
November 29, 2021
A judge is allowing a Broadway actor arrested for his alleged walk-on role in the Capitol riot to remain free on pretrial release, despite his bizarre claims to be beyond the jurisdiction of the court.

At a contentious hearing held via videoconference Monday, James Beeks — a Michael Jackson impersonator who starred as Judas in a traveling "Jesus Christ Superstar" company until his arrest last week — narrowly escaped being jailed after a tense exchange with Chief Judge Beryl Howell of the U.S. District Court in Washington, D.C.

"I am an American standing under public law and I am here by special divine appearance," Beeks told Howell.