Klayman: Biden Contemplates More "Affirmative Action" Federal Judicial Picks Not Based on Intellect & Acumen but Skin Color! He Should Have Learned His Lesson With Kamala Harris as VP!
Order "It Takes a Revolution: Forget the Scandal Industry!" at Amazon.com 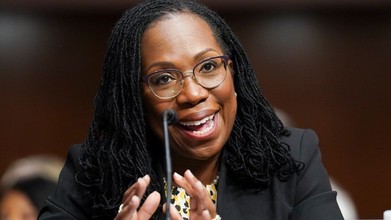 For Jackson, who has served on the U.S. Court of Appeals for the D.C. Circuit for just six months, her vote in the potentially landmark constitutional case would likely figure as the most distinguishing feature of her judicial record if she ultimately runs the gauntlet of a polarized Supreme Court confirmation process.

"Judge Jackson's role in the executive privilege fight will no doubt play a prominent spot in a nomination hearing if, as anticipated, she is ultimately selected as the next nominee for the Supreme Court by President Biden," said Bradley Moss, a national security law expert and partner in the Law Office of Mark S. Zaid.