Klayman: Sen. Lindsey Graham Is A "Closet" Biden Supporter!
Order "It Takes a Revolution: Forget the Scandal Industry!" at Amazon.com 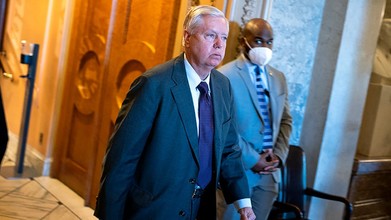 Graham emerges as go-to ally for Biden's judicial picks
By Jordain Carney
TheHill
November 27, 2021
Sen. Lindsey Graham (R-S.C.) went viral during the Trump administration, and bolstered his conservative cred, with a fiery defense of then-Supreme Court nominee Brett Kavanaugh. But now, he is quietly emerging as one of the GOP's most frequent supporters of President Biden's judicial nominees.

The evolution is the latest turn for the South Carolina Republican and former Judiciary Committee chair — regarded by his critics as a political chameleon but one known for his relationships with Democrats and willingness to shift within his own party.