Klayman: And Many Are Upset That The Homosexual Buttigieg Took Two Months Off With His "Male Wife" for So Called Maternity Leave as the Nation's Transportation System Crashed
Order "It Takes a Revolution: Forget the Scandal Industry!" at BarnesandNoble.com 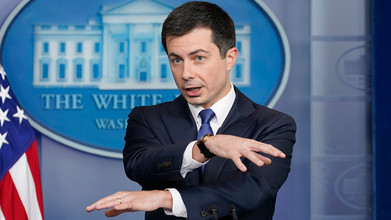 Buttigieg was asked by NBC News anchor Chuck Todd to weigh in on the case, which concluded Friday after a jury acquitted Rittenhouse in the fatal shooting of two men during a riot last year in Kenosha, Wisconsin.

"Look, there's a lot of pain in this country, and that pain and that frustration was aroused by the entire case, including the verdict," Buttigieg said. "And for a lot of us, there's just a lot to be upset about, a lot to be concerned about, but we'll move forward as a country.