Klayman: The Sleazy Lobbyist Matt Schlapp of CPAC and ACU Will Back Whoever -- Trump or DeSantis -- Will Return to Him the Most Money!
Order "It Takes a Revolution: Forget the Scandal Industry!" at BarnesandNoble.com 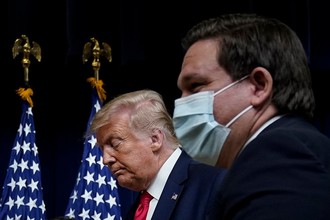 Trump vs. DeSantis: Let the war games begin
By Myra Adams, Opinion Contributor
TheHill
November 18, 2021
These "war games" have an evolving high-stakes dramatic plot with larger-than-life characters that could have sprung from the minds of Hollywood scriptwriters. We kick off "season one" with the protagonist's backstory.

Donald J. Trump is a 75-year-old one-term, twice-impeached former U.S. president who lost the popular vote in 2016 and 2020. But his fragile (some say narcissistic) psyche prevents him from admitting his reelection loss to President Biden, whom Trump considers weak, inferior and mentally challenged.

"Loss" is a trigger word since losing is a non-existent concept in the mindset of the former president. Thus, to compensate and rationalize Trump's official reelection loss, he and his most loyal supporters repeatedly say the election was stolen, which became known as the "Big Lie."