Klayman: The Shaman and Roger Stone Have a Lot in Common: Sentenced to 41 and 40 Months Respectively! But Trump Pardoned Stone After His Convictions on Seven Felony Counts!
Order "It Takes a Revolution: Forget the Scandal Industry!" at BarnesandNoble.com 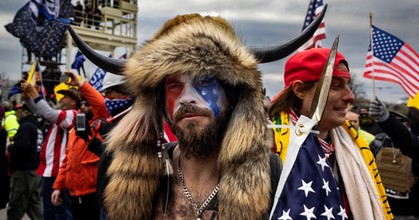 'QAnon Shaman' is sentenced to over 3 years in prison for role in Capitol riot
By Tim Stelloh, Pete Williams and Marlene Lenthang
NBC News
November 18, 2021
WASHINGTON — The Arizona man known as the "QAnon Shaman" will serve 41 months in prison after he stormed the U.S. Capitol on Jan. 6, a federal judge ruled Wednesday.

In handing down the sentence for the man, Jacob Chansley, U.S. District Judge Royce Lamberth said: "What you did was horrific, obstructing the functioning of the government. What you did was terrible. You made yourself the epitome of the riot."

Chansley, 34, stood out among the rioters on Jan. 6 by appearing shirtless with face paint, wearing a furry headdress with horns and carrying a U.S. flag and a bullhorn.