Alan Dershowitz: Rittenhouse 'Should Be Acquitted,' Then Sue Liberal Media Outlets for Their 'Deliberate and Willful Lies'
Order "It Takes a Revolution: Forget the Scandal Industry!" at BarnesandNoble.com 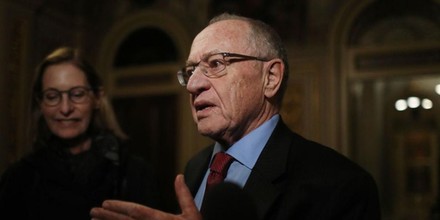 TheBlaze
November 16, 2021
Former Harvard Law School professor Alan Dershowitz blasted liberal media outlets such as CNN and the New Yorker over the weekend for their biased and erroneous reporting on the Kyle Rittenhouse trial. What did he say?

The scholar said the Illinois teenager charged with killing two men and wounding another during Black Lives Matter riots in Kenosha, Wisconsin, last summer "should be acquitted" and then should go on the offensive against the media outlets that have branded him a white supremacist vigilante before the conclusion of his trial.

"If I were a juror, I would vote that there was reasonable doubt [and] that he did act in self-defense," Dershowitz told Newsmax on Saturday.