Klayman: This Is a Stupid Article: The "Flamer" Buttigieg and The "Cackling Witch" Harris Are Irreparably Damaged!
Order "It Takes a Revolution: Forget the Scandal Industry!" at BarnesandNoble.com 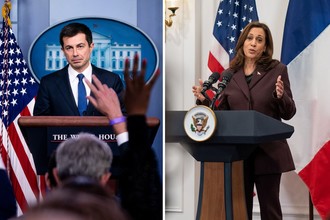 He explained how the legislation would benefit communities of color, where he found little support when he ran for president. Later, the former mayor touted the plan at the COP26 climate summit in Scotland, enjoying a global spotlight. And he posed for photos with former president Barack Obama, smiling as the popular ex-president rested a hand rested on Buttigieg's shoulder.

At the same time, Vice President Harris traveled to Paris at a fraught moment for the U.S.-French alliance, as well as for her own tenure. She faced questions from reporters about whether she needed to make amends for a U.S. submarine deal that had enraged the French government, the latest thorny issue she has had to navigate. At one point, a reporter shouted, "Vice President Harris, did you apologize?"