Klayman: More Federal Judicial Tyranny in the D.C. Swamp!
Order "It Takes a Revolution: Forget the Scandal Industry!" at BarnesandNoble.com 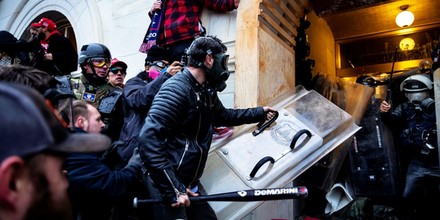 A former CEO of a Chicago-area tech firm who was accused of throwing a chair towards police during the Capitol riot was sentenced to 30 days in prison
By Kelsey Vlamis
Business Insider
November 14, 2021
"I am sorry for my actions that day and accept the court's decision," he wrote. "As a patriotic citizen, I hope and pray that the people of our nation will move forward united by the many commonalities we share."

According to court documents, prosecutors said Rukstales was part of a group that followed police who were retreating down a stairwell in the Capitol, with surveillance footage showing chairs tumbling down the stairs behind them.

As the police tried to regroup into a defensive line, Rukstales "descended the stairwell, picked up one of the chairs at the bottom of the stairwell, and threw it in the direction of where the officers had retreated," according to prosecutors. They added police were "dozens of feet away" at that point and that they were not in danger of being hit by the chair.