Klayman: Baldwin Should Be Criminally Prosecuted for Manslaughter but He Won't Be as a Leftist Hollywood "Elite!"
Order "It Takes a Revolution: Forget the Scandal Industry!" at BarnesandNoble.com 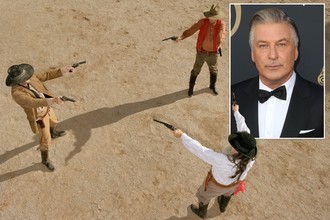 Alec Baldwin ignored the No. 1 rule of gun safety: Hollywood weapons expert
By Kerry J. Byrne, Conor Skelding, Dean Balsamini and Dana Kennedy
New York Post
October 25, 2021
Alec Baldwin, who accidentally killed his cinematographer on the set of his film "Rust," should have never pointed a gun at another human, even if he believed it was safe, Hollywood safety experts told The Post.

And the actor is now likely to face a gauntlet of legal challenges — including possible criminal charges — as both the man who pulled the trigger and as the executive producer responsible for set safety, legal experts said.

"Loaded or unloaded, a weapon never gets pointed at another human being," Hollywood firearms consultant Bryan Carpenter of Dark Thirty Film Services told The Post.