Klayman: Obama Is the Pot Calling the Kettle Black: This Anti-White Racist Ignited His Culture Wars!
Order "It Takes a Revolution: Forget the Scandal Industry!" at BarnesandNoble.com 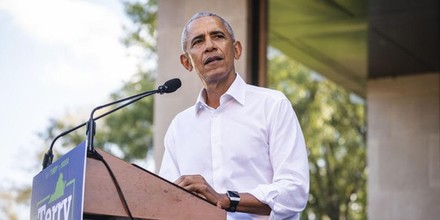 Barack Obama slapped with reality check after he denounces 'trumped up culture wars,' 'fake outrage'
TheBlaze
October 25, 2021
Former President Barack Obama was slapped with a reality check Saturday after urging Virginia voters to ignore what he called "fake outrage" and "trumped up culture wars" that he claimed are being peddled by "right-wing media." What did Obama say?

While campaigning for Democrat Terry McAuliffe in Virginia, Obama denounced focusing on cultural issues, instead saying that Americans should be concerned with recovering from the COVID-19 pandemic.

"We don't have time to be wasting on these phony trumped up culture wars, this fake outrage that right-wing media peddles to juice their ratings," Obama said.