Klayman: Why Was the Gun Pointed and Fired at the Cinematographer! Was Baldwin on Drugs or Drunk? Felony Murder?
Order "It Takes a Revolution: Forget the Scandal Industry!" at BarnesandNoble.com 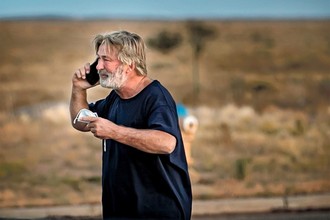 Alec Baldwin didn't know weapon contained live round: warrant
New York Post
October 23, 2021
Alec Baldwin was told it was safe to use a loaded prop gun minutes before he pulled the trigger and fired a round that killed a cinematographer, a warrant application from the Santa Fe County Sheriff's Office said.

Assistant Director Dave Halls didn't know the firearm had live rounds inside, announcing it was a "cold gun" when he gave Baldwin the weapon on the set of "Rust," a Western movie filming in New Mexico on Thursday, investigators said.

The gun was one of three that the film's armorer Hannah Gutierrez had placed on a cart outside of a wooden structure where a scene was being performed, the warrant said.

Halls grabbed the gun from the cart and brought it inside to Baldwin to use for the scene, detectives said.