Klayman: Manchin and Sinema Should Get Secret Service Protection as Radical Leftists Are Both Ruthless and Lawless!
Order "It Takes a Revolution: Forget the Scandal Industry!" at BarnesandNoble.com 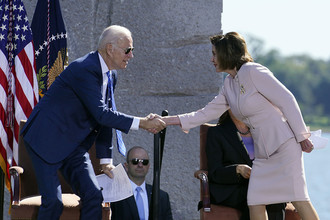 Pelosi huddles with Biden as Dem dealmaking intensifies
By Sarah Ferris, Burgess Everett, Heather Caygle
POLITICO
October 22, 2021
President Joe Biden had breakfast with Speaker Nancy Pelosi on Friday as Democrats close in on a deal on Biden's social spending plan, though a final agreement with the party's two Senate centrist holdouts is unlikely to come this week.

Several sources with knowledge of the intensifying talks said they doubted a deal could come together on Friday given where things stand between Biden and Sens. Joe Manchin (D-W.Va.) and Kyrsten Sinema (D-Ariz.). But Democrats are ending the week with far more clarity from that duo than they began, giving the party increasing confidence it can land a framework for the bill this month. Talks are expected to spill into the weekend, with both chambers gone until Monday. Advertisement