Klayman: Anti-Semite and Self-Hating Uber-Leftist Jew Bernie Sanders & Fellow Commies Need to Get Their Own "Medicine!"
Order "It Takes a Revolution: Forget the Scandal Industry!" at BarnesandNoble.com 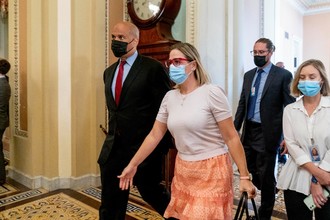 "We're committed to birddogging Kyrsten Sinema with her constituents until the very end," Our Revolution Executive Director Joseph Geevarghese said in an interview. "What we want to show is that her constituents are very serious about wanting policies and activism and we're going to make her life unpleasant or uncomfortable until that happens."

Our Revolution, the Bernie Sanders-inspired grassroots group, is joining Arizona union leaders, educators and other grassroots activists for a series of demonstrations outside of her Phoenix and Tucson offices over the next several days, according to a strategy outline first shared with POLITICO.